The earliest ASDs have 3 digits after ASD. The first one is ASD 251 Scheherazade, conducted Beecham, and was issued in 1958, and the last one was ASD 655, Jacqueline Du Pre and Janet Baker, conducted Barbirolli, issued in 1965. 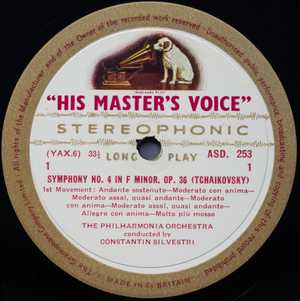 See all the ASD white/gold labels I have in stock

From ASD 576 up to ASD 655 the original label is “semi-circle”. The label shows the painting of “Nipper”, the HMV dog, hearing His Masters Voice through the horn of an early gramophone. The picture is in a semi-circle with HIS MASTER’S VOICE in white above it. 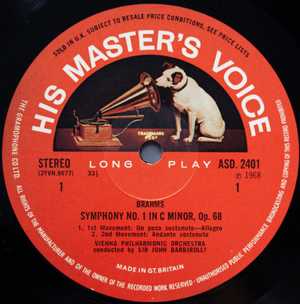 This is also the original label for the some of the ASD four digit record codes. These start with ASD 2251, Schubert Symphony no 9 conducted Barbirolli, issued 1966. The last semi-circle label ASD is ASD 2478, Menuhin conducting Schubert, issued in 1969. There is no semi-circle label for ASD 2476, Barenboim playing Bartok.

See all the ASD semi-circle labels I have in stock

Just to confuse us, there’s a lot of ASDs below ASD 2478 where there is no semi-circle label. These are LPs that were recorded by Melodiya in the USSR and pressed by HMV in the UK. (Clearly Melodiya was making very fine recordings). These are HMV/Melodiya. The first of these that I know of is ASD 2406 Soviet Army Chorus issued in 1968. This is their original label: 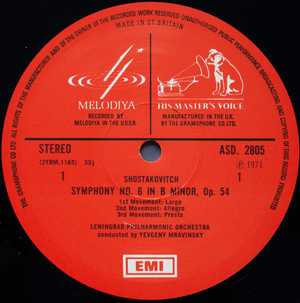 Just like the UK recorded ASDs, the HMV/Melodiyas have superb sound.

See all the ASD HMV/Melodiyas I have in stock 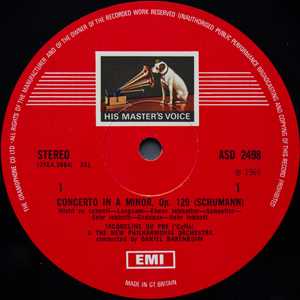 The coloured “dog/stamp” is easy to identify. The dog Nipper is in rectangle that’s a bit like a postage stamp. But this “early” dog in stamp label mustn’t be confused with the “late” dog in stamp from the early 1980s. This “early” or “original” dog in stamp is on a solid red background. (The “late coloured dog/stamp” has a white circle round the edge of the label).

The last early coloured dog/stamp I know of is ASD 2812 Boult conducting Wagner, issued in 1972. But there are many ASD numbers before this where the original label is the next label: “black & white dog/stamp”. One example of this is ASD 2719, Klemperer conducting Bruckner, issue 1972.

So what does the “black & white dog/stamp” label look like? As you can no doubt guess the picture of Nipper in the rectangle is in black & white rather than colour. And it has a white line round the circumference. 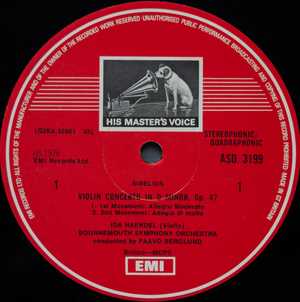 Then comes the late coloured dog/stamp which has a white line round the circumference. 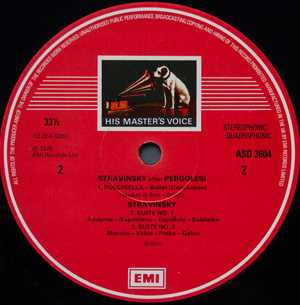 The last HMV label is the “large dog” label. These are often German pressings. 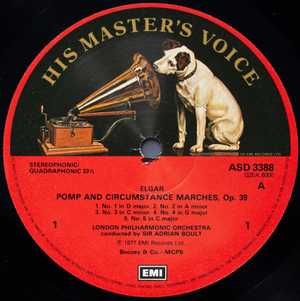 Which HMV ASD label should you buy?

CSD is a HMV stereo label, very similar to ASD in sound. Many of the HMV CSD issues are non-classical, but there are many outstanding classical issues too. Some of the notable conductors on this label are Colin Davis, Goossens, Irving, Kurtz, Mackerras, Sargent, Silvestri, Susskind, Weldon. Outstanding artists include Jaqueline du Pre, Moura Lympany, Moiseiwitsch, Tortelier

The first CSD label is very similar to the ASD white/gold label, but the background is pale green instead of white, 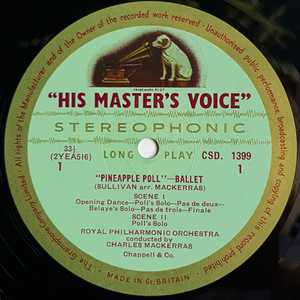 The CSD series starts with CSD 1251 which is non-classical. CSD 1252 is Ballet Music conducted by Irving, issued in 1958

The last green/gold CSD I’ve had is CSD 1503, British Light Music of the 20th Century conducted by Weldon, issued in 1963

The next label is 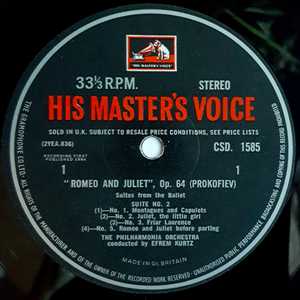 These were issued between 1963 & 1969, the first classical issue on this label I've had is CSD 1512, Bach Cantata no 147 conducted by Geraint Jones. The last one I've had is CSD 3660, Elgar Sacred Music , sung by the Choir of Worcester Cathedral.

The last CSD label is a green dog/stamp label 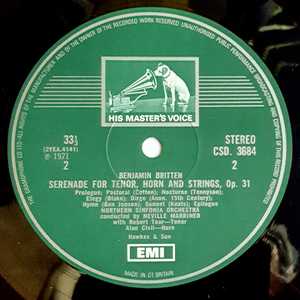 Which CSD label should you buy?

What labels do SLSs have? I usually list white/gold boxed sets and semi-circle boxed sets under their ASD numbers. So the ones I list under SLS have dog/stamp labels - original coloured dog stamp onwards.

See all the SLS sets I have in stock

Many Opera and vocal sets were issued in the SAN series, and included librettos, even if there was only 1 LP in the set, such as SAN 107, Cluytens conducting Faure's Requiem, and SAN 162, Carmina Burana. HMV started issuing SANs in 1963, with SAN 101/2. They were issued in gatefold sleeves if there was 1 or 2 records, boxes if there were 3 or more records. The first label was original white angel/gold label. 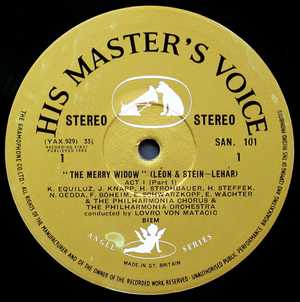 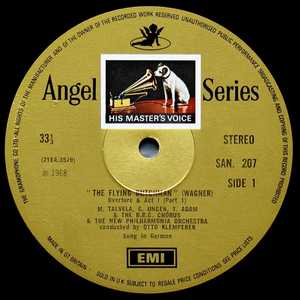 The third label is yellow, with a coloured dog/stamp. The first original yellow label that I know of is SAN 291

Walter Legge, the very influential Producer for HMV, was unconvinced by stereo initially so his late 1950s & early 1960s mono recordings are very fine, and rival the early stereos.

HMV, started issuing mono ALP records in 1952, starting with ALP 1001, Cantelli conducting Tchaikovsky's Symphony no 5. The original label was red/gold. The last red/gold label that I know of was ALP 1960, Stravinsky's Oedipus Rex, issued in 1963. That's a mono issue of ASD 511, as we're well into the stereo era by 1963. 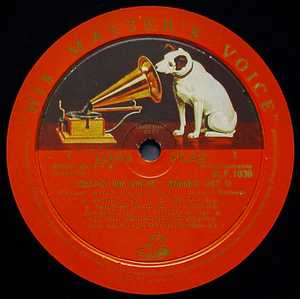 Most ALP pressings are "groove guard" pressings. The rim has a slightly raised area. If you feel the edge of the record through the inner sleeve you can feel the raised rim. This was to protect the record when an auto-changer turntable was used. Auto-changers had a long spindle, and several records could be loaded onto the spindle, and when one finished playing the next record would drop on top of it. This was clearly very useful for 78rpm records, when a symphony would need 10 or 12 records, but autochangers continued to be used into the 1950s and even the 1960s. 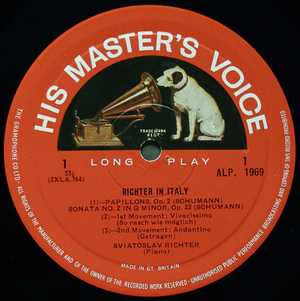 HMV continued issuing ALPs until 1966, then issued occasional ALPs which were re-issues of much earlier 33CX recordings (also an EMI label), that warranted full price re-issues. Two examples are ALP 3799 Maria Callas Sings Operatic Arias by Puccini, originally issued on 33CX 1204, and ALP 3843 a Schubert Recital by Elizabeth Schwarzkopf and Edwin Fischer, a re-issue of 33CX 1040

Which ALP label should you buy?

Most of the ALPs you will see offered are original red/gold label. Both the red/gold and the semi-circle labels have exceptional sound. Many of them qualify as "audiophile" despite not being stereo!