From 1966, as well as full price labels such as ASD, HMV also issued many fascinating and high quality recordings on their mid price label HQS. Many, though not all of these, are Chamber Music, such as HQS 1029, Beethoven Cello Sonatas played by Jacqueline Du Pre and Stephen Bishop, and the Beethoven String Quartets played by the Hungarian Quartet. Many are piano music, some are harpsichord music, some are early and baroque music, such as one of my favourite recordings, David Munrow's Two Renaissance Dance Bands. Why were these recordings mid-price, when the sound quality is just as splendid as full price HMV LPs? My guess is that they were cheaper to record than orchestral recordings, as there were only a few performers to pay rather than a full orchestra. Possibly EMI considered that Chamber Music would not have as big sales as great Orchestral works and the lower price would tempt people to buy them. If anyone has further information on this I would love to hear from them.

The earliest HQS label is red/black. The last red/black label that I've had is HQS 1215 issued in 1970 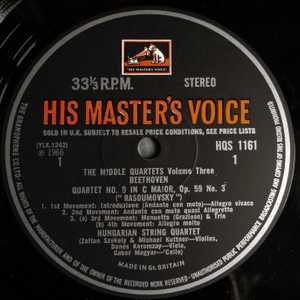 The next one is plum with a coloured "dog in stamp". This is not very common, and the last one I've had is HQS 1252 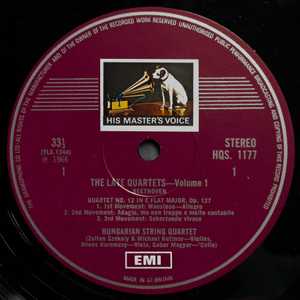 The third HQS label is a plum "dog in stamp" 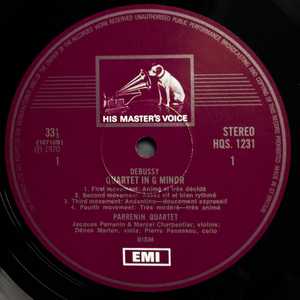 Many SXLP LPs are original EMI recordings, and the SXLP issue is the first UK issue. Two examples are SXLP 20028, Samson Francois playing Liszt Piano Concertos conducted by Silvestri, and SXLP 20043, Campoli playing the Beethoven Violin Concerto. Many others are UK issues of US Westminster recordings, These combine the very high quality of Westminster recordings with the splendid sound quality of EMI early 1960s pressings. A few are UK issues of French recordings, such as Cluytens conducting Beethoven Symphonies. (You can find more information on these in Beethoven Symphony Recordings by Cluytens). Some are first stereo issues of recordings previously issued on mono only, such as SXLP 30018, Tortelier playing the Dvorak Cello Concerto. Others, are re-issues of superb ASDs & SAXs, such as SXLP 30063, Kogan playing the Brahms, Violin Concerto, with the same matrices as SAX 2307.

The sound quality of these issues is equal to the best of ASDs and SAXs.

All the SXLP 20000 series have the silver/blue chevrons label 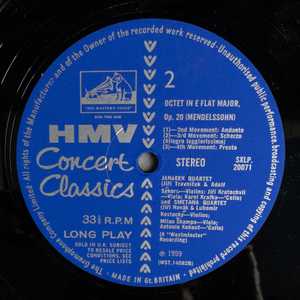 Nearly all subsequent SXLP 30000 series have a blue "dog in stamp" label. 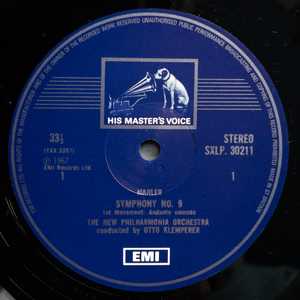 See all the HQS records I have in stock

See all the SXLP records I have in stock