Lyrita specialised in music by British Composers, mostly of the 20th Century. Every Lyrita stereo pressing has superb audiophile sound. Their first issues, from 1959, prefix RCS, were mono only. I don't know who pressed the earliest pressings, most of these mono-only issues were pressed by Decca. Their first stereo issue was in 1966, SRCS 31. Decca pressed all of the stereo Lyritas until 1979 - the year that Decca moved to a pressing plant in Holland. Very occasionally you can find a Decca groove pressing on the earliest issues, but they are rare. The highest number groove pressing I have seen is SRCS 38. 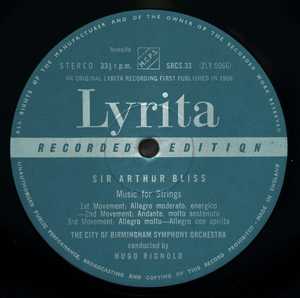 In 1979 Lyrita started having their records pressed by Nimbus. This was a very successful move, as Nimbus pressings have excellent sound. Eventually Lyrita had their own pressing plant. Although many collectors seek out the Decca and Nimbus pressings, the late Lyrita pressings are equally fine.

All Lyrita labels are similar, so you can only tell which pressing you have in your hand by looking at the the matrices and lead out grooves.

Here we can see the "Decca style" matrices that can be seen on Decca SXLs, and on other labels pressed by Decca.

Occasionally we find these Decca style matrices with a pressing that looks similar to SXL Dutch pressings. I think these must have been made just after Decca moved to Holland and before Lyrita moved to Nimbus pressings.

Nimbus matrices look handwritten, in a small neat hand, and somewhere on the lead out grooves is a very small blocky "NIMBUS ENGLAND" stamper.

Lyrita's own pressings have the matrices in a larger "scrawly" handwriting

Which Lyrita pressing should you buy?

Any and all of them! Splendid music, much of it very little known, and superb sound. The most famous one is SRCS 109, English, Scottish & Cornish Dances by Matthew Arnold. That will be expensive. There are lots of splendid Lyritas at far more reasonable prices.

See all the stereo Lyritas I have in stock