Decca started issuing LPs in 1950, and started issuing Stereo LPs in 1958. They produced some of the finest stereo LPs, and many collectors particularly value the "Decca Sound". English Decca is entirely different from the US Decca company. Many English Decca pressings were issued in the US on the London label, with the prefix CS.

So first let’s look at a “wide band” Decca label. 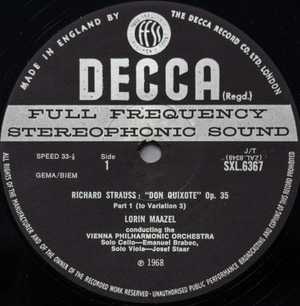 It has “ffss” in a silver circle at the top of the label. The “wide band” is the the silver band just above the spindle hole, that says “Full Frequency Stereophonic Sound”. 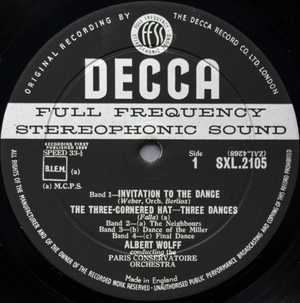 See all the SXL ED1s I have in stock 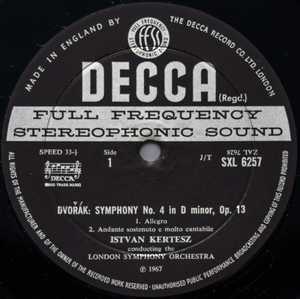 See all the SXL ED2s I have in stock

ED3 is the third and last wide band label. They have "Made in England" between 9 & 12 o'clock, round the edge of the label, but they don’t have a groove in the pressing. 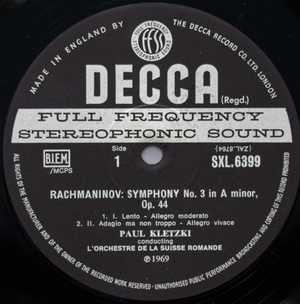 See all the SXL ED3s I have in stock

As you can see from all this, it can be hard to know which SXL 6000 series have which label as their original, first label. Over the 28 years Spiral Classics has been selling LPs, I have compiled a database of over 40,000 records that have been through my hands. So I've been able to use my database, together with research online, to establish what the original labels are. If you'd like to know what the original label is for any wide-band SXL 6000 series, whether ED1, ED2, or ED3 , you can look at my original labels resource. (All SXL 2000 series have ED1 as their original label, but I have included the 2000 series to note which ones weren't issued and which ones are part of a 2, 3 or 4 record set.)

The last ED3 is SXL 6448. All SXLs from SXL 6449 onwards have a narrow band label as their original label. Some call this ED4. English pressed narrow band labels have a silver rectangle that says DECCA, and “Made in England” in small print above the rectangle. As you can see the silver band saying “Full Frequency Stereophonic Sound” (below the rectangle), is narrower than the wide band on ED1, ED2, ED3. 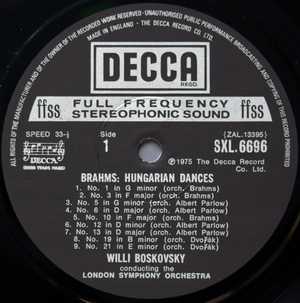 See all the SXL narrow bands I have in stock 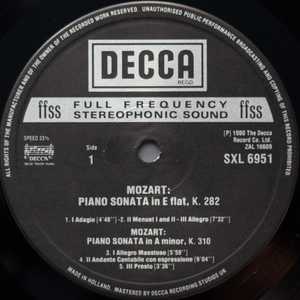 A few of the earliest SXL 2000 series have a “blue back sleeve”. Sometimes described as a “blue riband” 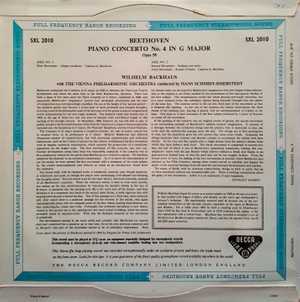 These are quite rare, and only the first few SXLs issued had these sleeves on the earliest pressing. The last blue back sleeve I know of is SXL 2115, but there are probably earlier numbers where no blue back sleeve exists

Decca issued SXL boxed sets from 1958 to 1960, in the SXL 2000 series, such as SXL 2101/3 Rheingold, SXL 2215/7 Die Zauberflöte. In 1962 they started issuing boxed sets on the SET label (see below), then from 1965 to 1974 they issued SXL boxes in the SXL 6000 series, such as SXL 6238/41, Vienna Chamber Music Festival, SXL 6586/7, Alicia de Larrocha playing Albeniz, SXL 6620/2, Prokofiev Romeo and Juliet. Then from 1970 they issued boxed sets with a letter after the SXL, starting with SXLA 6452/61, Backhaus playing the Beethoven Piano Sonatas, that had been recorded between 1960 and 1969, and ending with SXLM 6665/7, Dorati conducting Kodaly Orchestral Works, all recorded in 1974. So some of these boxed sets pulled together earlier recordings, while others were original recordings. SXLH 6610/3, Kertesz conducting Brahms Symphonies was the first issue of all except Symphony no 2.

Which Decca SXL label should you buy?

Some collectors want original labels. These are often the most expensive. They are certainly the most “collectable”. Many collectors believe that original labels have the best sound, but I don’t agree that this is always the case. Vinyl from the late 1950s and early 1960s has a slightly noisier surface than vinyl pressed in the mid 1960s onwards. You get a quieter surface on ED2 pressings and on ED3 pressings. They are all “audiophile” pressings with superb sound quality. As indeed are very many narrow bands. Second and third labels are a good deal less expensive than “original” labels, and I recommend them, as it is sound quality that interests me most. So you don’t need to spend a fortune to start to build up a superb-sounding collection of SXLs.

Note: Some less experienced sellers have recently been using the term ED1 incorrectly. They think ED1 means “first edition”. They call an any SXL that it is the first pressing of that recording “ED1”. I have seen original ED3 labels described as ED1. The unwary buyer thinks they have found a very rare item with an ED1 label. You can be sure if you buy from Spiral Classics that when I say that the label is ED1, it is the ED1 label that I have shown you above.

The SET series are also an original Decca label. Decca usually used the SET prefix for records that have a libretto, like Opera boxed sets, Oratorios, and recitals by Singers. But occasionally they used the SET prefix for other records, such as SET 332, Bernstein conducting - and playing - Mozart, and SET 231, Karajan conducting Brahms. They started issuing SETs in 1962. Before that, Opera sets had SXL record codes.

The labels are identical to ED1, ED2, ED3, and narrow band except for their colour. They are silver on plum. 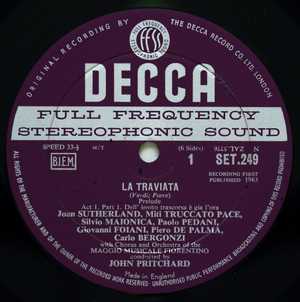 These recordings have the superb SXL sound. The Opera recordings are magical! And many of them are amazingly good value.

See all the Decca SETs I have in stock

All the LXT 2000 series have a gold/orange label as their first label. The label is orange and the print is gold. 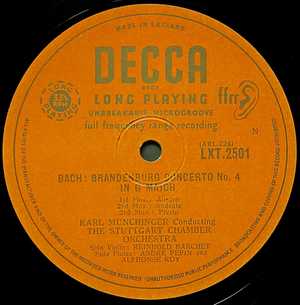 In 1955 Decca started their LXT 5000 series with a set of 3 LPs, LXT 5000/2, Mendelssohn's Elijah, conducted Joseph Krips. The last gold/orange label that I know of is a set of 5 LPs, Strauss's Die Frau Ohne Schatten conducted Bohm on LXT 5180/4, and issued in 1956. But just as with the stereo labels, many of the LXT numbers earlier than LXT 5180/4 have Decca's next LXT label, silver/orange, as their first label. The label is still orange, but the print is silver. 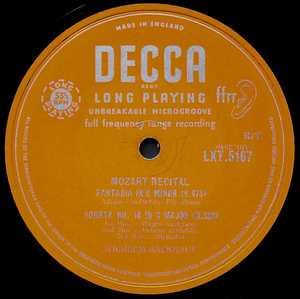 In 1958 Decca started issuing stereo records on SXL. But they continued to issue mono LXTs, some are mono issues of the SXL recordings, some are mono-only issues, with no SXL issued. The last mono-only issue in the LXT 5000 series that I know of is LXT 5516, a Piano Recital by Peter Katin. The last LXT 5000 series that I know of is LXT 5682, the original mono issue of SXL 2313, La Fille Mal Gardee. And that brings me to the exception I mentioned above. LXT issues of recordings also issued on SXL often have the groove pressing that we see in SXLs, with the groove 1 cm from the edge of the label. 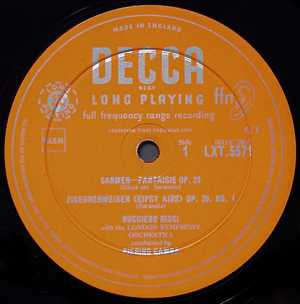 LXTs continued to be issued in the 1960s, with the LXT 6000 series starting in 1962. The first one was LXT 6003, Honneger's Christmas Cantata & Symphony for Strings, which is the mono issue of SXL 6003. LXT 6000 series have the same numbering as the equivalent SXL.

Which Decca LXT label should you buy?

I find it very difficult to advise on this. When I've tried to compare different labels of the same recording I've found the sound is different but not necessarily that the sound is better on the gold/orange copy or better on the silver/orange copy. Just different. Some of the early gold/orange LXTs have magical sound. But so do the silver/orange ones! One point worth noting is that the later labels (so pressed after 1955) will have quieter vinyl as the quality of vinyl was improving through the 1950s, just as it continued to do in the 1960s. I'd be interested to hear from collectors who've made comparisons themselves.

You don't need to spend a fortune on early SXLs to get superb early Decca recordings. Decca started issuing Ace of Diamonds, with the prefix SDD, in 1965. The earliest issues were groove pressings, just like SXLs. Some of them were in fact SXL 2000 series that had been pressed but not yet sold. They were labelled SDD and sold at a cheaper price than SXLs. They have the same matrices as the original SXLs. 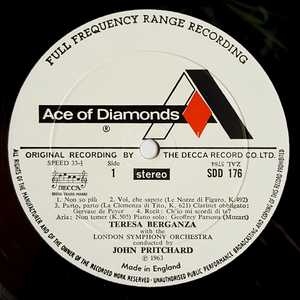 This earliest label always has FULL FREQUENCY RANGE RECORDING in the top half of the label, and has a groove, just like SXL ED1s and ED2s. I call this the original ffrr label. By 1968 most of the SDDs had the ffrr label but many were not groove pressings, so are similar to the ED3 label.

In 1968 Decca started using a slightly smaller label. I think of this as the equivalent of the SXL narrow band. But just as with SXLs there isn't a clear cut-off point when they changed to the small label. 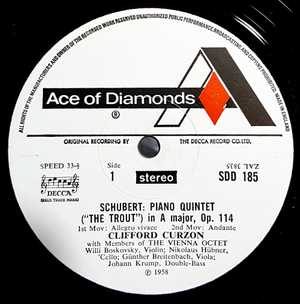 All SDD 185s have a small label. But some later numbers have an original ffrr label. The highest number ffrr label I know of is SDD 197.

Most, but not all SDDs were re-issues of SXLs. Some were the first stereo issue of recordings that were only originally issued in mono, for example SDD 247, Ansermet conducting Stravinsky. And some were original first issues such as SDD 250, Dvorak played by the Janacek Quartet.

Not all Ace of Diamonds have the SDD prefix. Decca used GOS for Ace of Diamond Opera sets. The labels are very similar to the SDD labels 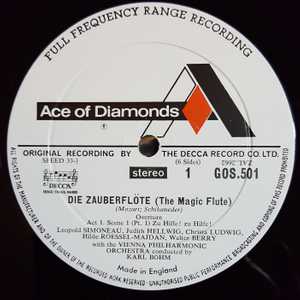 Most of these are re-issues of SXL opera recordings. The exception is GOS 558/9. Britten's Prince of the Pagodas which is the original issue.

GOS are not the only SDD boxed sets. There are also SDD boxed sets with an extra letter after the SDD, for example SDDA 261/9, Brahms Complete Works for Piano, played by Julius Katchen, SDDF 337/9, Ansermet conducts Ravel. They all have the small SDD label as original.

There are some wonderful stereo recordings on the Eclipse label issued from 1970 to 1978. But if you are picking up records in a charity shop or thrift shop you need to be aware that many of the earlier Eclipse issues are electronic stereo re-issues of mono recordings. You need to look at the back of the sleeve, next to the spine, where this is an arrow pointing down to some text that tells you if this is a stereo recording. If you see an ECS in my stock list you can be sure that it is genuine stereo, as I don't stock the electronic stereo ECSs. Many of the genuine stereo Eclipse issues are recordings that were not issued on SXL. Some of them were early recordings in stereo made in the late 1950s and but only the mono version was originally issued. For example ECS 595, Ricci, Virtuoso Showpieces, and ECS 697, Ferras playing Mozart Violin Concertos. Others are re-issues of splendid RCA stereo recordings such as ECS 580, Martinon conducting Shostakovich, and ECS 674, Reiner conducting Strauss Till Eulenspiegel. Others still are recordings that were only issued originally on the London label, such as ECS 663, Campoli playing Saint-Saens, and ECS 746, Ricci playing Prokofiev. A few were never previously issued such as ECS 620 & ECS 621, Magaloff playing Chopin Mazurkas. and ECS 639, Campoli Encores. From about 1972 onwards Decca re-issued many superb early SXL 2000 series on ECS. 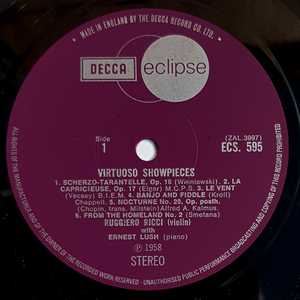