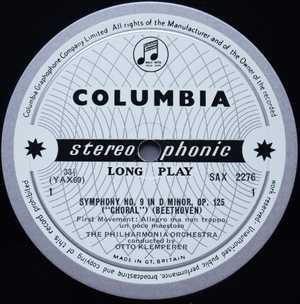 See all the SAX silver/blue labels I have in stock

The second label is the red semi-circle label. 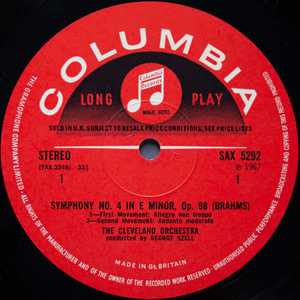 See all the SAX semi-circle labels I have in stock

The third label is the red label with musical notes and the word “Columbia” in a black rectangle. 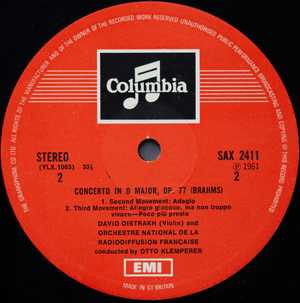 Which Columbia SAX label should you buy?

SCX is a Columbia stereo label, very similar to SAX in sound. Most of the Columbia SCX issues are non-classical, but there are some outstanding classical issues too. Some of the notable conductors on this label are Cluytens, Henry Krips, Mackerras, Szell & Weldon.

The first SCX label is very similar to the silver/blue SAX label, but the background is pale green instead of pale blue 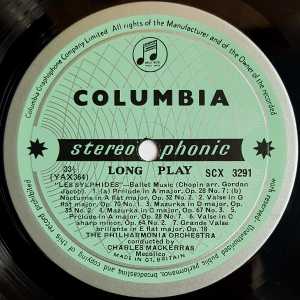 The first SCX is SCX 3251, Waldteufel Waltzes, conducted by Henry Krips, issued in 1958, and the last original silver/green label I've had is SCX 3467, Bach Organ Recital played by Edouard Commette, issued in 1962

The second SCX label is the original turquoise/black label 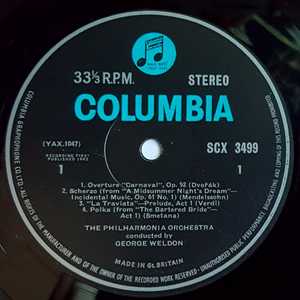 The first original turquoise/black label I have had is SCX 3499, Weldon conducting Tchaikovsky's 1812 Overture, issued in 1963

The last original turquoise/black label I have had is SCX 6132, Judith Raskin singing Mahler Songs, issued in 1966

Which Columbia SCX label should you buy?

I would recommend all of them, as the sound quality of the silver/green label is very similar to SAX silver/blue sound quality. And the turquoise black label is equivalent in sound to SAX semi-circle label.

UK Columbia's mono 33CXs was an EMI label, just like the stereo SAXs. 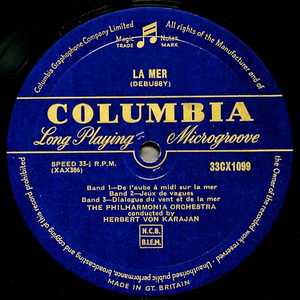 The very earliest 33CX issues have a heavy, flat pressing, this pressing is quite rare. The label says "Non breakable" above the record code. (A few don't say "Non breakable"), and there is a deep grove about 1cm from the edge of the label. 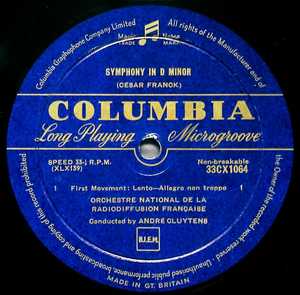 Most 33CX pressings are groove guard pressings. The rim has a slightly raised area, If you feel the edge of the record through the inner sleeve you can feel the raised rim. This was to protect the record when an auto-changer turntable was used. Auto-changers had a long spindle, and several records could be loaded onto the spindle, and when one finished playing the next record would drop on top of it. This was clearly very useful for 78rpm records, when a symphony would need 10 or 12 records, but autochangers continued to be used into the 1950s and even the 1960s. Sometimes we find an opera set that has "automatic coupling" so that the first record has sides 1 & 6, the second has sides 2 & 5, and the third has sides 3 & 4. That takes a bit of concentrating when you're playing the set, to play the correct sides!

The second 33CX label is the red semi-circle label. This label is identical to the SAX semi-circle label, except that it doesn't say "stereo" to the left of the label, under the white line. The first original semi-circle 33CX that I know of is 33CX 1863, but there may be earlier numbers that have no blue/gold label. Many of the 33CXs issued from 1958 onwards were also issued in stereo, but there were still many mono-only 33CXs issued. The last mono-only 33CX that I know of was 33CX 1888, Charles Rosen playing Ravel. 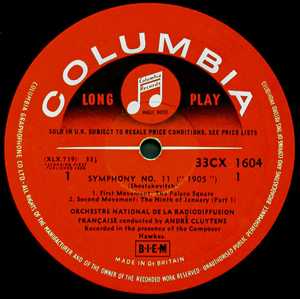 Which Columbia 33CX label should you buy?

Splendid sound on all of them. As with other labels, the later vinyl pressings are likely to be quieter than the earlier ones, due to improvements in the vinyl. Semi-circle labels of expensive blue/gold issues are very good value.