L'Oiseau-Lyre records are well worth exploring by any collector who likes the UK Decca sound. From 1953 they were pressed by Decca, and in 1970 Decca acquired the company. L'Oiseau-Lyre was originally a French music publishing company founded in 1932, by Louise Dyer, publishing early and baroque music. From there they expanded to early and baroque music recordings, originally on 78s,and were the first French company to issue LPs. 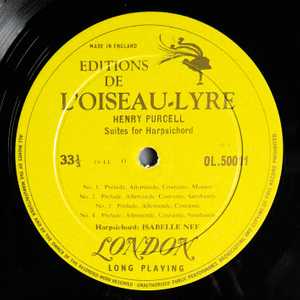 L'Oiseau-Lyre mono LPs have the prefix OL, 5 digits beginning with 50. Their label is gold/yellow. Later pressings have a silver/yellow label, reminding me of LXT silver/orange labels. All the 1950s LPs I have seen are of early and baroque music ranging from Monteverdi to Handel with many composers that were less familiar in the 1950s.

In 1959 they started issuing stereo LPs. "As the major record labels muscled in on the growing baroque market Mrs Dyer turned her energies to discovering new talent. Her extraordinary ability to identify the potential of musicians early in their careers resulted in some of the first recordings of Colin Davis, Joan Sutherland, Janet Baker, the Melos Ensemble and Thurston Dart." (thanks to overgrownpath.com). Recordings from this early stereo period include Mozart, Berlioz, Weber, Stravinsky, Debussy, Ravel. And the Bach Cello Suites played by Jean-Max Clement on SOL 60016/7, a much sought-after rarity. The SOL 60000 series went from 1959 to 1962. 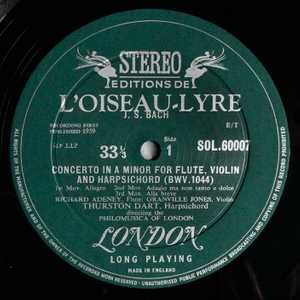 This first stereo label is a large label, filling the cut-out in the inner sleeve. They are Decca groove pressings, so you can expect the same quality of sound as SXL 2000 series.

From 1963 onwards L'Oiseau-Lyre used 3 digits, starting with SOL 250, Schoenberg Serenade, The earliest of these had the large groove pressing label. The last groove pressing I have seen is SOL 300. 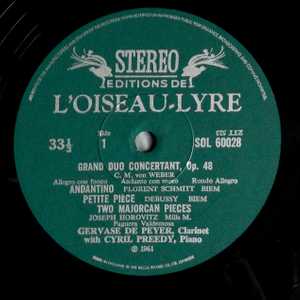 This is the second Stereo label, and is the first label for SOL 301 onwards. The SOL 3 digit series has widely ranging repertoire, ranging from baroque music to Shostakovich. The last SOL 3 digit I've had through my hands is SOL 347, Cavalli, issued in 1976. 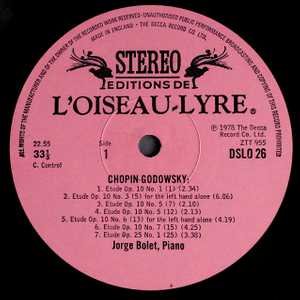 In 1972, now belonging to Decca, L'Oiseau-Lyre started a different series of LPs, DSLO, with a pink label. These had 1 and 2 digit numbers, starting with DSLO 1. Many of these were Twentieth Century music, Avant Garde, electronic etc. Some were piano music, many were chamber music. Among the most notable are the Fitzwilliam Quartet's splendid Shostakovich String Quartet recordings, and two splendid recordings by Campoli. The last of these pink label DSLOs that I know of was DSLO 47, issued in 1980. 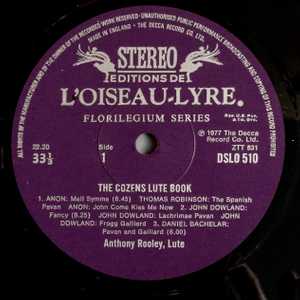 In 1972 L'Oiseau-Lyre also started their superb Original Instrument Early Music series, the Florilegium Series, with their distinctive white sleeves, starting with DSLO 501. Christopher Hogwood, Anthony Rooley, Emma Kirkby featured large, and the repertoire ranges from Dowland to Mozart. There are a lot of Florilegium records in my own collection. If you have never tried original instrument recordings try some of these DSLOs. 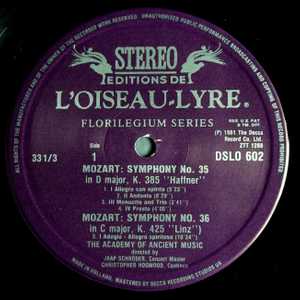 In the 1980s Florilegium continued with the DSLO 600 series, Dutch pressings, as Decca was now pressed in Holland, and from 1982/3 with digital recordings on DSDL 700 series 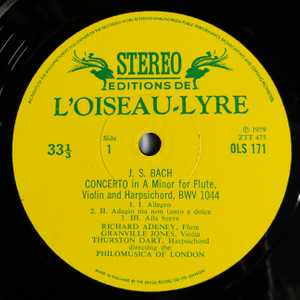 Many of these were electronic stereo, but some were splendid stereo recordings which well deserved to remain in the catalogue. Among these gems are the Complete Mozart Piano Sonatas played by Artur Balsam, on OLS 177/81, and the famous, and hard to find, Bach Solo Cello Suites played by Max Clement, on OLS 133/4.

See all the L'Oiseaux-Lyre records I have in stock